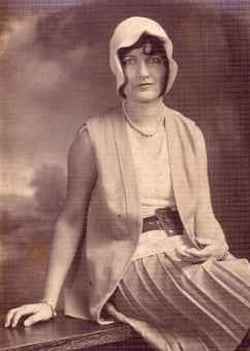 You can tell by looking at her picture, my Grandmother is an artist.  She was fortunate to be the only girl of five children, the oldest and most favored child.  Blessed with living in a small town and growing up with an abundance of relatives, she had it all:  family, intelligence, charm, style, looks, wit, strong pride and character.  Despite growing up during two World Wars, raising two children and losing two husbands, she spent as much of her life as she could enjoying herself, singing or dancing, having lunch with her friends, working in her garden, reading, decorating.  She loves flowers, music, sweets, colors and antiques.  The artist that she is came out when she was in her 60's when she decided that although she couldn't draw a straight line, painting sure looked like fun.  And paint she did.  She painted what she loved and her family loved what she painted.

She is the keeper of the family history and stories from her wealth of relatives.  Our family looks to her to know our roots.

She is a beautiful woman, with sparkling blue eyes that mirror her personality.  She has lived a charmed life and she has charmed those who have been fortunate enough to know her.

My Grandmother,  advancing in years, began to worry about what the future might hold for her.  She was concerned about the physical and mental effects of old age - things beyond her control.  She had no fear of what would happen to her financially because she had already established a secure financial and legal plan - something within her control.

She planned carefully.  She gave my Mother her Power of Attorney and a copy of her Living Will with explicit instructions of what she wanted and didn't want if she should become incapacitated.  She put my Mother on her checking account and her charge account.  She gave my Mother all the tools that she thought would enable  her daughter to care for her if needed.  She set up her estate so the eventual distribution would be fair and equal to both of her children.

She gave herself peace of mind that no matter what happened, she'd be all right.

In February of 1994, the worst happened.  My Grandmother suffered a massive stroke.  The damage was extensive, she had brain surgery and wasn't expected to survive.

For over 10 years now, she is a person trapped inside her own body.  She cannot speak at will, cannot move on her own, cannot swallow freely, is unable to eat and drink, and is incontinent.  She requires 24 hour care.

Perhaps even a greater personal hurt to my Grandmother came after her stroke, when her son, much to everyone's surprise, began a campaign against my Mother and my Grandmother in an effort to get to his inheritance.  My Grandmother hadn't protected herself against her own son, she didn't think she had to.  She was wrong.

Because of my Uncle's legal harassment, my Mother's attorney advised her a guardianship should be set up to care for my Grandmother and protect her.

My Mother didn't know.  She did what her attorney advised and began the guardianship process.  It has turned out to be a nightmare.  Since the appointment of a financial guardian (a bank) for my Grandmother almost four years ago, every financial decision and all the careful planning my Grandmother had made prior to her stroke has been reversed.  The financial guardian, the Bank, and the Court have ignored all of my Grandmother's wishes and have in fact, acted against her wishes.

She had extensive investments with a broker she had dealt with for over 20 years.  The first thing the Bank did was get started seizing those investments -- to bring all of my Grandmother's assets into their bank where they could also make money off of her money.  They  billed thousands of dollars for this and it was completely against my Grandmother's wishes.  They have liquidated almost all of her investments and have re-invested in accounts that they preferred; and everybody knows the bank is making thousands of dollars off of her money.

What they didn't do was put themselves, nor their two attorneys, on a budget and they are freely billing with no restrictions or accountability.  To date, they have collectively billed my Grandmother nearly  $75,000 for "managing" her estate for less than four years.

When I ask for my Grandmother's funds for her use, I get a big hassle.  They treat her like an employee, not a customer.  I have even had to pay for her medicine when they wouldn't give my Grandmother her own money.  I ask for comfort items (such as an awning to shade her deck from the sun so she can sit outside and enjoy the fresh air) for my Grandmother and she is denied.  The family is outraged and sends in letters and petitions requesting my Grandmother's money be spent on her comfort.  The Bank doesn't even have the courtesy to respond to any of the 20+ family members.  AND, they charge my Grandmother for asking for her own money.  Do you have to pay when you go to the Bank and withdraw some of your own funds?  No, you don't.  But, my Grandmother, the "protected person" has to pay the Bank when I ask for her money and she has to pay them again when they deny her.

They are "protecting" my Grandmother's estate for their benefit.  They pad their bill -- all the while withholding my Grandmother's money from her as much as they can.  And the Court will approve  of their enormous fees until all of the money is gone --- and then, the vultures at least will be gone as well.

But, then, what are we going to do?  My Grandmother will still be alive and she'll still need care, medicine, and supplies only there won't be any of her money left for her.

The Bank, the cold, hard, institution and the Bank's lawyers make thousands of dollars profiting from my Grandmother's unfortunate disability.  She can't speak for herself nor defend herself from them.  I am fighting for her as hard as I can, but the Bank and the Court are still exploiting her.

Banks are making millions, perhaps billions, of dollars off of the defenseless elderly in this manner.  We've got to stop abusive guardianships now.  My Grandmother carefully planned, worked hard and saved for her old age.  And now she finds herself controlled by a cold, hard institution who's priority is not her nor her care, but rather how much money they can keep from her for themselves.